HOW SCIENCE IS MAKING WINTER
JACKETS WARMER THAN EVER

In March, Columbia Sportswear launched Omni-Heat™ Black Dot technology which was named as one of the '100 Greatest Innovations of 2020' by Popular Science. The new gear follows a long history of humans innovating clever ways to stay warm outside—but it's never been done like this.

Thousands of years ago, our ancestors crafted primitive capes out of wolverine fur to keep warm in the winter—there weren’t a lot of options, after all, for Paleolithic winter apparel.

European cave dwellers later morphed the cape into more of a coat-like garment, but it wasn’t until Canadian Inuits invented the caribou parka that humans began wearing anything resembling the modern winter jacket.

Much of today’s cold-weather apparel has been driven by outdoor athletics. Mountaineering ascents in the early 1920s prompted the first wave of down jackets and, as winter sports went more mainstream with activities like skiing and snowboarding, the demand on textile engineers grew to develop increasingly effective winter apparel. 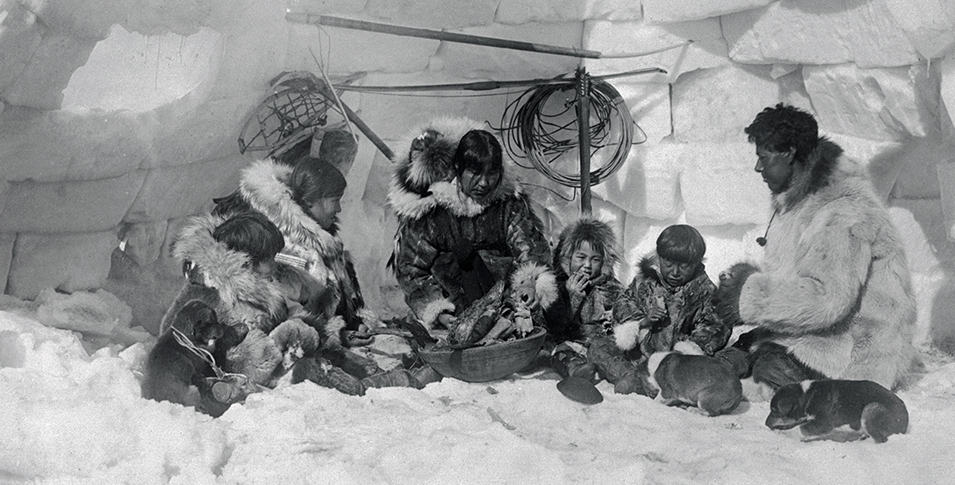 Early Inuits in Canada developed the parka, which later evolved into the modern winter jacket.
Remarkably, however, throughout this entire history—from primitive fur tunics to modern puffy jackets—all winter coats relied on the same principle: trapping warm air and holding it close to your body.

That is, until about a decade ago.

Around this time, a small team of clothing innovators at Columbia Sportswear began developing a new type of heat-retention technology. It was based on a concept that NASA had been using for years.

In space, there’s no air so you can’t use it to trap warmth. Instead, astronauts rely on the heat that radiates from their own bodies. That’s why the insides of spacesuits contain silver layers—as astronauts’ bodies radiate warmth, the aluminized material directs it back at them. 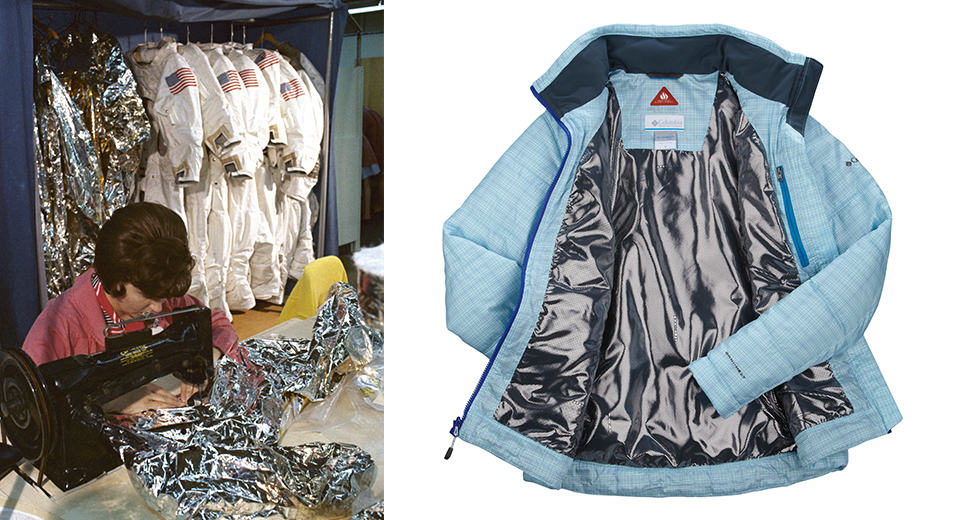 The announcement marked the first time since Neanderthals wrapped themselves in animal furs that winter jacket technology had advanced beyond simply trapping air.

That said, it wasn’t the first time that NASA technology had inspired uses outside the space agency. Marathon runners had used the shiny metallic material to keep their bodies from cooling off too quickly after races and the emergency blankets in survival kits were often made utilizing similar construction.

The difference was that, up until then, no one had thought to put it inside jackets.

Omni-Heat™ 3D technology, which was released in 2018, added small pods of vertically oriented fibres to the jackets, making the jackets even warmer.

SO WHY THE SILVER DOTS?

The problem with putting aluminium foil inside winter jackets is that, even if the layer is thin enough to be soft and comfortable, it’s not breathable. According to Dr. Haskell Beckham, Columbia’s Senior Director of Innovation, this was the greatest challenge the team of innovators had to overcome.

'A [solid] film of aluminium on the inside of your jacket wouldn't let any of your moisture get out and you’d eventually start baking and sweating like crazy,' he said. 'What the Columbia innovation team figured out how to do 10 years ago was to take the foil and apply it on a fabric in the form of little dots. The dots themselves reflect the heat and the spaces between the dots have the same properties as the normal fabric, which allows it to breathe.'

And so, the silver dot matrix that you see inside Columbia Sportswear jackets made its grand appearance.
'It’s perfect. Now make it better.' ~ Gert Boyle, Columbia Sportswear
Since the release of the first Omni-Heat™ jacket 10 years ago, newer and better iterations of the reflective technology have been released. For example, 2018’s Omni-Heat™ 3D technology added pods of vertically oriented fibres. These fibres create a small separation between the aluminium and the wearer, making the jackets even warmer. 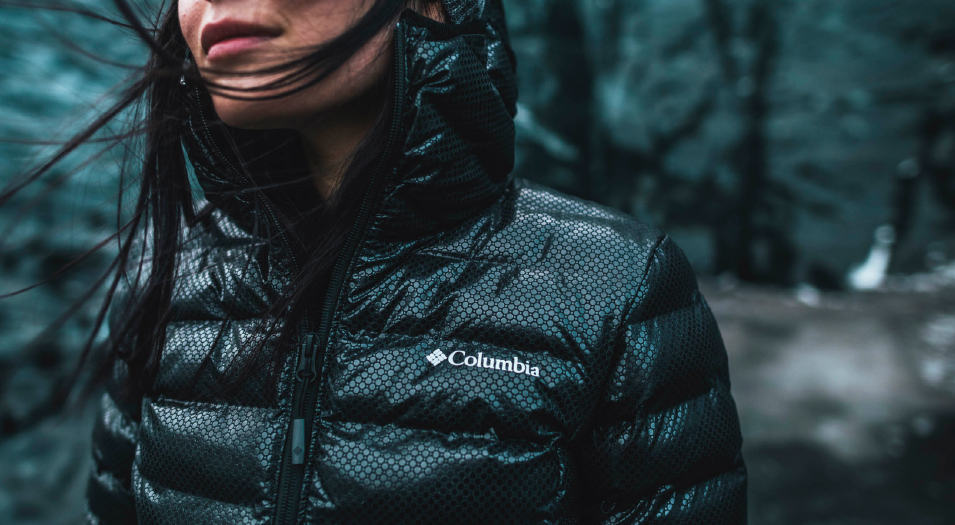 Columbia Sportswear’s new Black Dot technology relies on thousands of multilayered black dots that work like magnets to soak up solar heat while also preventing your body’s warmth from escaping.

Now, with the new Omni-Heat™ Black Dot fabric, Columbia has found a way to put the technology on the outside of the jacket too, creating an extra layer of warmth.

According to Beckham, it came from wanting to address the issue of heat loss on the jacket shells. Heat transfer occurs more effectively when there are big temperature differences, he explained, so if your body is warm but the outside air is cold, a lot of heat can be lost from the shell.

Placing Omni-Heat™ dots on the outside of the jacket helps solve this problem by creating a condition on the surface that acts similarly to modern windows. 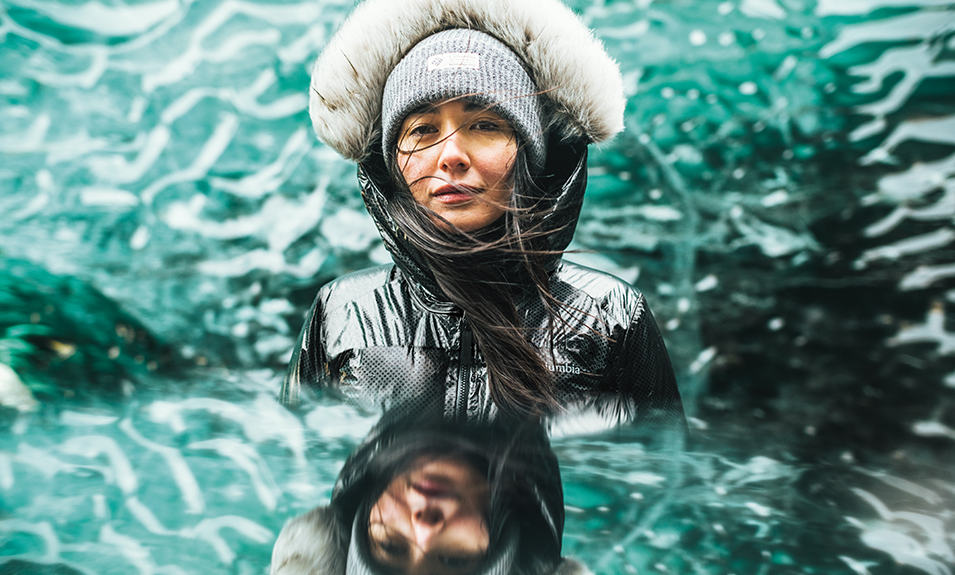 Omni-Heat™ Black Dot technology creates a surface condition known as low emissivity that’s similar to window coatings, making your jacket operate like a warm, well-insulated window pane.
'These days, most modern windows are made with low emissivity, or "low-E", coatings,' Beckham said. 'This helps retain heat inside the building that the window is installed in.'

That’s essentially what the foil does on the outside, he explained, turning the jacket into a low-emissivity heat shield.

When the Columbia innovators began imagining what the coat would look like, however, they realized they might have an aesthetic issue on their hands.

'We recognized that a thin film of aluminium would keep heat from radiating out into the cold environment—but we also recognized that not everyone’s going to want to wear a silver jacket,' he laughed. 'So our innovation designer said, "Why don't you just make it black?" And I thought, "Well, that's a great idea." '

The team immediately realized that this would create another added benefit since black absorbs sunlight.

'Because it's black, now we can actually suck in solar heat as well,' he said. 'It acts like a little solar collector.'

They tested it against identical dot-free fabrics and—lo and behold—the new material absorbed more solar heat and retained heat for considerably longer periods of time.
Columbia Sportswear’s new Omni-Heat™ Black Dot technology delivers maximum thermal efficiency from the outside in, offering a whole new method of keeping winter adventurers warm.
Style-wise, Beckham explained, the final fabric now has a unique aesthetic with a subtle dotted texture. The team hopes that as people begin wearing the jackets, the material will capture the same arc of excitement that the first iteration of the Omni-Heat™ technology did.

In that case, it was gearheads who first adopted the aesthetic due to how well the dots worked and, as word got out, the look slowly branched into the mainstream. Over time, the silver dots have become a visual badge of sorts that indicates you’re wearing a high-tech coat or baselayer.

'I hope they love the look because I’m telling you right now, it works—it works really, really well.' 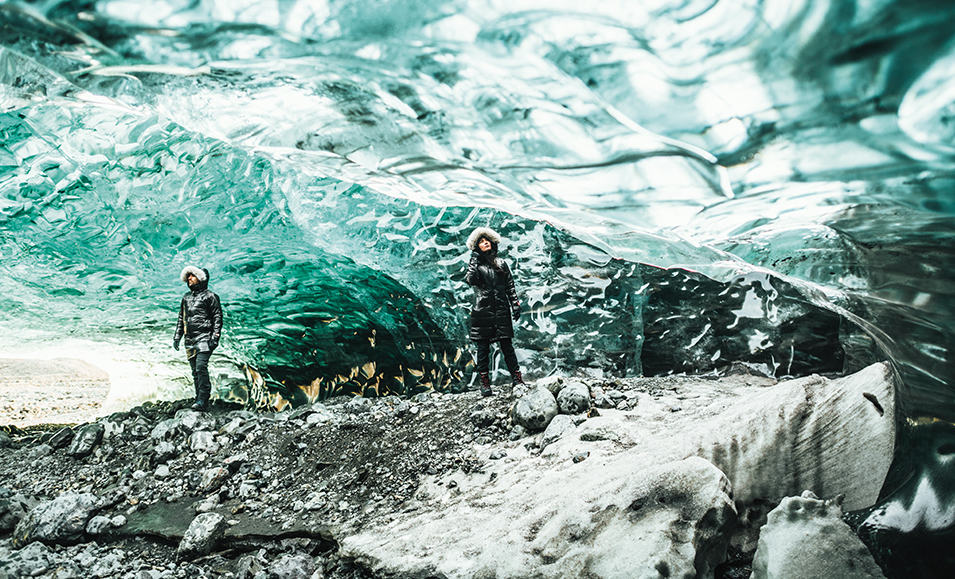